In the United States, more scientists are needed because of the considerable gap that is growing between the US and the rest of the world in terms of scientific abilities. Children, particularly girls, need to be encouraged at a young age to take up science, technology, engineering, and math (STEM) subjects.

According to Pew Research, America is nearing the bottom in terms of rank in relation to the 35 most developed countries in the world in STEM.

In particular, math scores have plummeted in recent years. The study (see link) shows that 38% of high school students are operating at the lowest level of math achievement. http://www.pewresearch.org/fact-tank/2017/02/15/u-s-students-internationally-math-science/

When asked to rate STEM education in the US, 46% of scientists stated that it was below average.

One explanation is that US education has become so focused on exams and rote learning that the natural curiosity of children is being erased. Parents do it too.

We get irritated when our kids ask us “Why?” all the time. We don’t know the answers, don’t want to find out, and don’t encourage our children to find out either.

But with an entire world of knowledge right at our fingertips thanks to the internet, it doesn’t have to be this way. We can support children as they seek answers. Teachers can foster an atmosphere in their classrooms where it is okay to ask questions without seeming silly in front of their peers.

Teachers can also be more approachable, being willing to answer questions after class, or by appointment with the student. Not every child is going to be an Einstein, but often the support and encouragement of a teacher or mentor can lead to great things.

Another central issue is that very few STEM graduates go into teaching. Few would opt for teaching in primary school, but those are exactly the years at which a child’s imagination can be captured.

In middle school, science is often treated as optional, and for the best students only, leaving the majority without access. In high school, a crammed timetable often means science gets shortchanged. It becomes difficult and something to be endured, not an exciting career choice.

This is especially true for girls. They tend to be steered towards arts subjects, not STEM. This gender bias has serious consequences in terms of career options for women, and career advancement if they do decide to pursue a STEM career.

The report “Why So Few?” gives a number of reasons for this, including unconscious bias and a lack of role models, and makes various suggestions as to how things can change for the better:

STEM helps grow the economy, which is a good thing for all. Competition and profitable new technologies, for example, stimulate profits and increase the value of companies and their stocks and shares.

Japan, South Korea, and Germany are just three of the top countries which have led the way in terms of technological innovation. That innovation comes from those who dare to ask, “Why,” and try to come up with solutions to the world’s most pressing problems.

Science does not have all the answers, but scientists do actively seek knowledge and the truth. Recent years have seen a trend towards taking science out of school in favor of creationism, and disrespect for scientific findings such as vaccinations, climate change and even the moon landing.

Students taught creationism would be at a severe disadvantage if they ever wished to major in science at college. Continual exposure to science from a young age will help foster a more curious world view, making children eager to learn, and grow up doing something they are passionate about.

Hopefully, awareness of the issue needing more scientists is the first step. And any parent would do well to encourage the children to take an interest in science.

Be my bestie and get the latest on the greatest posts and special offers I share!

Want to know more about Sarah or to partner with us? Send an email to DannelleGay (at) gmail (dot) com

Check out our latest articles:

Check Out Our Other Sites:

Dannelle Fraser Gay tells you all about my mom, her sites, her books, her speaking opportunities, and more.
Operation $40K started it all and is great for recipes, meal planning, and budget-fiendly tips.
Try To Garden is about all things growing your own fruits, vegetables, and herbs.
Traveling Cheesehead is about the adventures of a traveling Wisconsinite and her family.
World of Caves is all about Underground Adventures and has FREE downloadable homeschool guides!
Crazy Camping Girl is about hitting the road and the great outdoors.
My Aussie Service Dog tells you about our adventures with our Aussie, who yes – is a service dog!
Gastric Bypass Gal is about life after gastric surgery with hints and tips for anyone looking for their own.
Beauty Awesome is about natural health and beauty care.
A Monkey on a Cupcake is all about cupcakes!
They Are Getting Old is about helping aging parents and the struggle of being in the sandwich generation.
Joyful Xmas is all about Christmas – from recipes to crafts, to history, and more!
Bug Out With Dannelle is all about emergency preparation!
Professional Social Media Influencer Network is where I have bloggers that reach over 74,830,000 people – what would that do for your product?
Girl Scout Daisy Mom has fun things for troop leaders of younger Scouts

I earned my Silver Award! 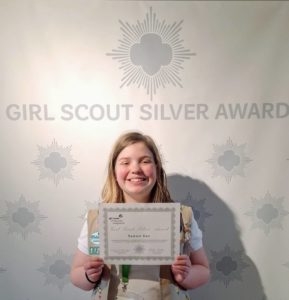 What Visiters Had To Say